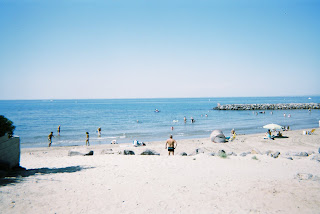 So i've been back off holiday for just over a week.
I've had my disposable cameras back and regret buying cheap ones.
Okay, it may have been due to the fact I were too close to the objects, but they haven't come out as well as I hoped. Also i'm certain some photos are missing, this could be due to the people who developed the film. I was hoping to get some half decent images/negatives so I could practise in the colour dark rooms. I guess, i'll just have to invest in a traditional film camera. - my cousin has offered me two of his canons I'll just need to buy a lens for it. I'm going to take up his offer if he still has them, i'll just have to wait for a lens.


Apart from that I had a fab holiday, the weather was in the mid 30s for most of the two weeks. We stopped at the rest area next to the Milau bridge, my dad encouraged my boyfriend and me to walk up to the top - this took around fifteen minutes. I got some okay shots, but we were more interested in the crickets/grass hoppers making all the noise around us - they were HUGE! I didn't take too many photos whilst I were out there throughout the holiday. This is because nothing interested me enough. I'm almost certain I'd like to go in to the area of portraiture and fashion photography. 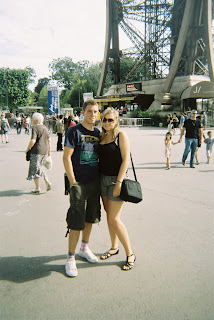 Since i've been back i've been booked for a family portrait session. A friend passed my information on to her work colleague. I'm nervous about it but at the same time looking forward to it. I've asked Steph to help me out, as she has a lighting kit too which we may need. The job is split in two, it involves a family of 4 (mum, dad and their 14 month old twins) They want a variety of photos taken. Then the mums twin sister has a 20 month old boy and they want photos together. On top of this they may have a group photograph. It will be a lot of work no doubt, but once I get my confidence up i'm sure i'll have a laugh.

I've also done another shoot for my book project. I'm set on a certain theme now, and have a rough idea of what I want to go into the book. I've not thought too much about the layout yet. I still want it to be a surprise to everyone though. I have decided to add more photoshop to the images than I originally wanted to, but this is only to give a greater effect to the images.

So far i've photographed three people for my book, I need to take more of them though. As well as needing more people for my photographs. I hate how I've no money at the minute - a car is so expensive. My money is all going on my car, as I need it to get to college! When I have more money I may produce a project similar to the ones in my book on a larger scale = more props, hair and makeup and better locations. 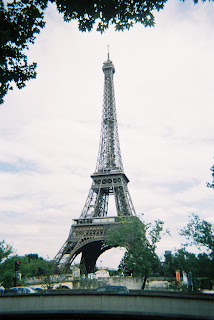 Over the summer i've found some amazing photographers. Through recommendations and just general browsing! I'll share some with you in a second post.

I can't wait to get back though, especially if we're working with MUA.

hope you're all having a great summer!